The idea of drinking from a boot (das boot) has over a century of history and culture. The legend says that general promised that he will drink beer from his boot if soldiers were successful in battle. When they won the general drunk the beer from a glass made in a shape of boot (instead of his own smelly leather boots). Since than it became tradition to drink from beer boot glasses. It is well known glass in Germany, Austria and Switzerland during festive drinking challenges.

It is an old trick to hand the boot to a novice drinker with the toe pointing away from him, which will result in beer pouring over the drinker’s face uncontrollably when air enters the toe. Seasoned drinkers always point the toe towards their body until the glass is sufficiently drained.

How to drink out of a glass beer boot?

You should always point the toe away from you and once you half way drinking start to turn the glass (90 degree) until it is sufficiently drained. 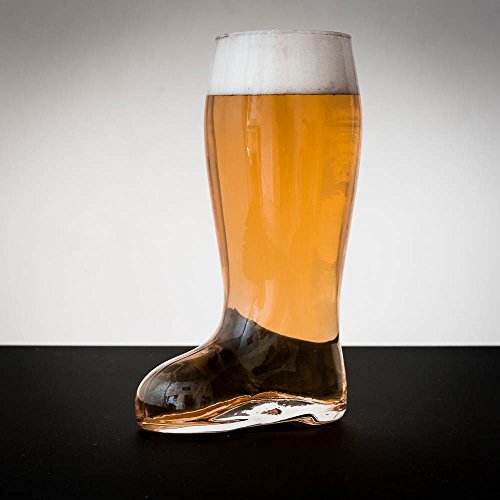 Well shaped and made of strong glass. Will hold approx. 1 Liter. Nicely packaged can be used as a gift. 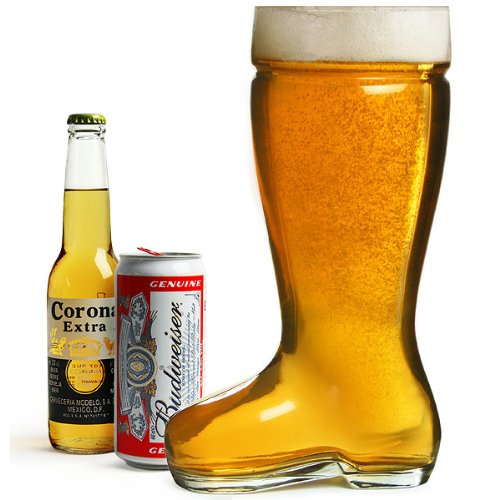 You can never fail with a gift like this. Funny and clever present which can be used for parties. It isn’t that difficult to drink from it if you know where to hold the glass. Grip it by the ankle and point the toe towards you when drinking. 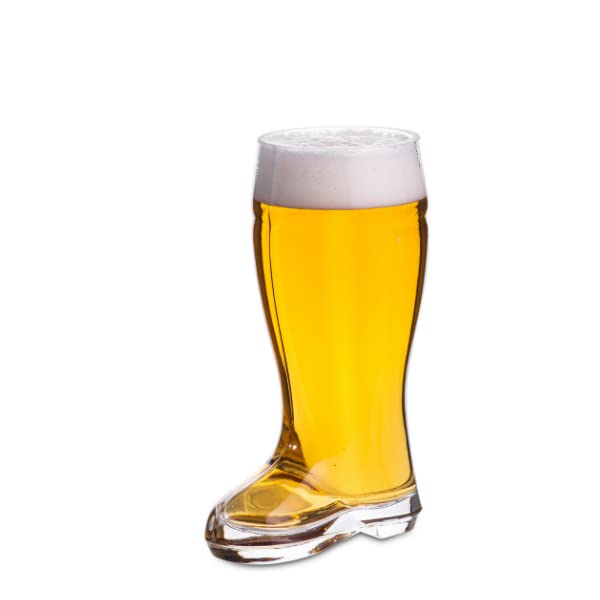 This is very unique and novelty gift idea. Sturdy glass that holds a pint. 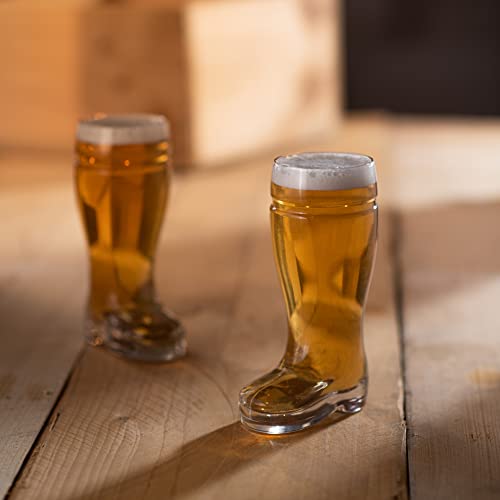 Looking for smaller boots? This boot shaped glass is only 330ml. 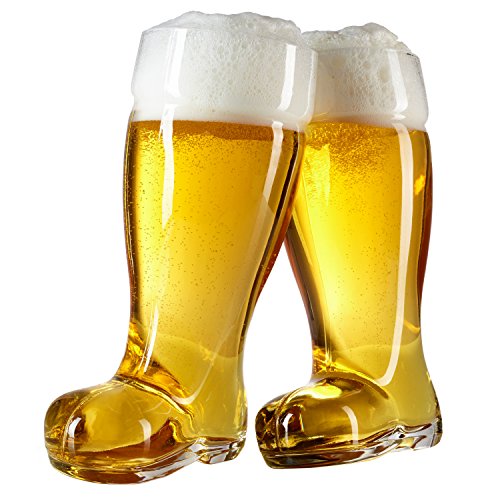 Well reviewed by other users these 2 huge boot shaped beer glasses can hold up to 2 liters. Add extra dimension to your next party and impress your mates. 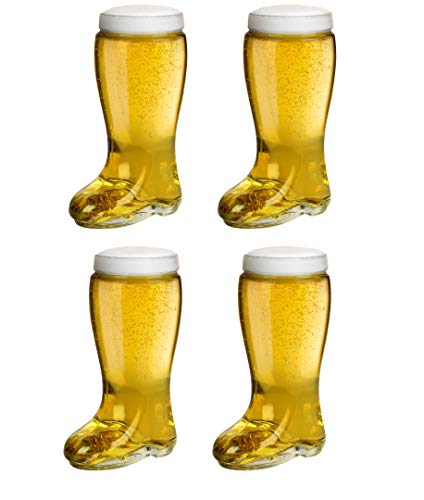 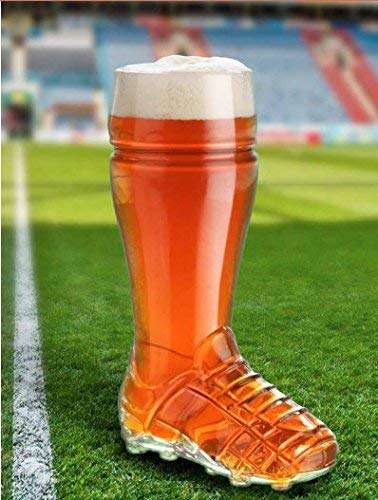 Looking for something even more unique? This will surprise you! Boot beer glass in a shape of a football boot. Hand wash only recommended. 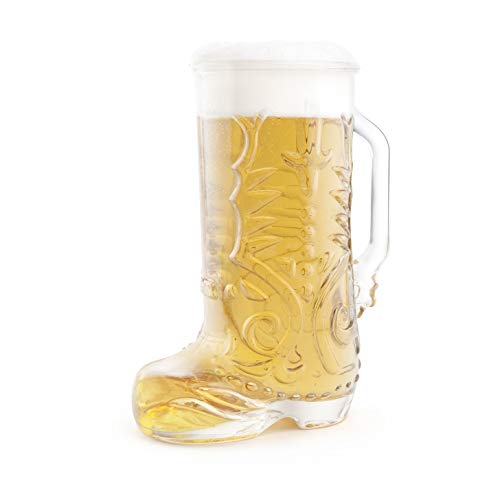 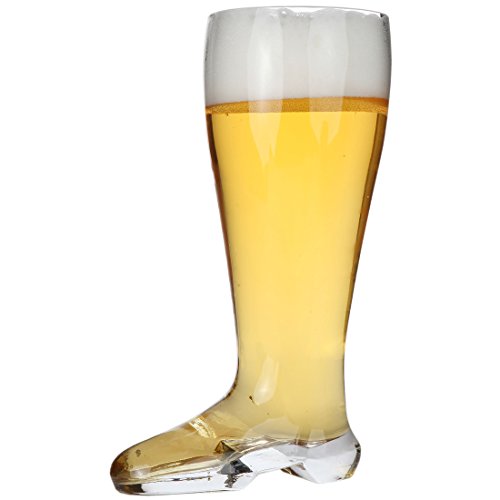 Drinking a beer from a boot glass is part of history. There is a lot of theories but the idea originated from German soldiers drinking from their boots during the war. This crystal clear glass is a high quality product. Highly recommended. 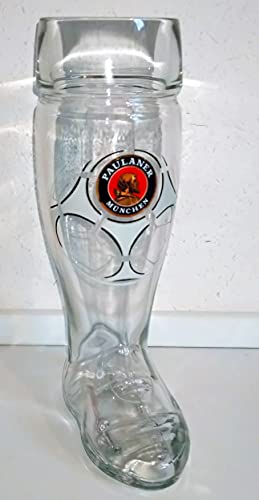 This is not very big glass, only 0.5L. It will be perfect for one beer to drink. It features original Paulaner branding. 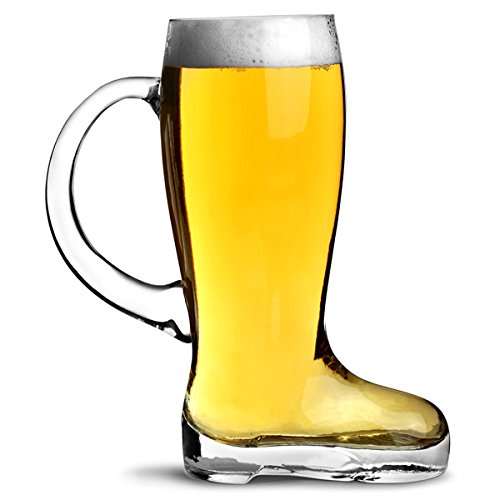 Not many beer boot glasses have a handle. This one is easier to use because it has good strong handle. With 1.75 pint capacity you will find this boot glass amazing and super fun. Great as a novelty gift or party feature.

We use cookies on our website to give you the most relevant experience by remembering your preferences and repeat visits. By clicking “Accept All”, you consent to the use of ALL the cookies. However, you may visit "Cookie Settings" to provide a controlled consent.
Cookie SettingsAccept All
Manage consent

This website uses cookies to improve your experience while you navigate through the website. Out of these, the cookies that are categorized as necessary are stored on your browser as they are essential for the working of basic functionalities of the website. We also use third-party cookies that help us analyze and understand how you use this website. These cookies will be stored in your browser only with your consent. You also have the option to opt-out of these cookies. But opting out of some of these cookies may affect your browsing experience.
Necessary Always Enabled
Necessary cookies are absolutely essential for the website to function properly. These cookies ensure basic functionalities and security features of the website, anonymously.
Functional
Functional cookies help to perform certain functionalities like sharing the content of the website on social media platforms, collect feedbacks, and other third-party features.
Performance
Performance cookies are used to understand and analyze the key performance indexes of the website which helps in delivering a better user experience for the visitors.
Analytics
Analytical cookies are used to understand how visitors interact with the website. These cookies help provide information on metrics the number of visitors, bounce rate, traffic source, etc.
Advertisement
Advertisement cookies are used to provide visitors with relevant ads and marketing campaigns. These cookies track visitors across websites and collect information to provide customized ads.
Others
Other uncategorized cookies are those that are being analyzed and have not been classified into a category as yet.
SAVE & ACCEPT
Go to Top