Welcome to PintGlass.co.uk, the best UK’s drinking glasses website with all important details about glasses for alcoholic and non-alcoholic drinks in one place.

Choosing the right glasses from extensive range might be difficult at the start but once you get the idea of what you need it starts to be less daunting. Depending on your drinking preferences you can choose specific type of glass. It could be a glass for beer, lager, cider, wine, whiskey, vodka or any soft drinks (for example Coca Cola). You should also take into consideration the size of the glass. For example a one pint glass or a half pint glass. The choice is yours :-)

How many ml in a pint glass?

All pubs and bars in United Kingdom must ensure that draught beer is sold in pints. To make sure this is the case they use certified one-pint glasses (usually with crown stamp).

Best Gift Sets for Her and for Him 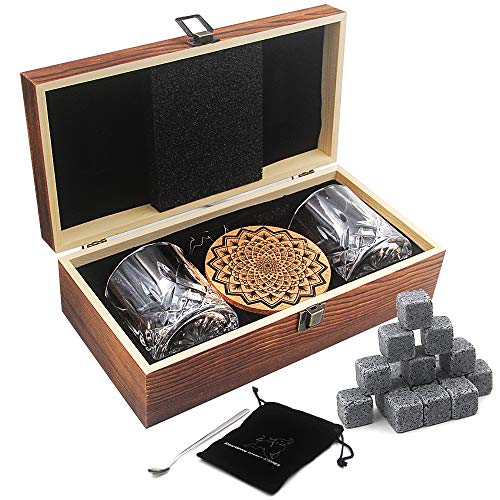 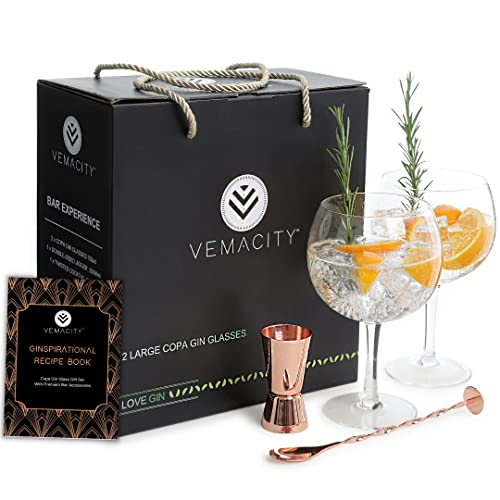 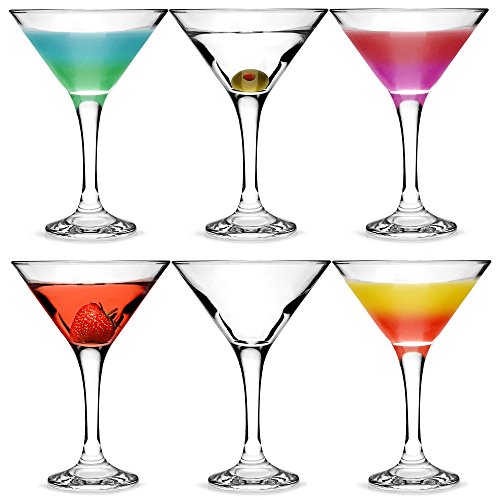 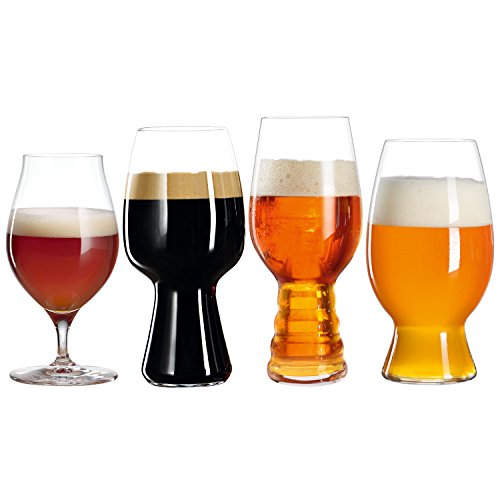 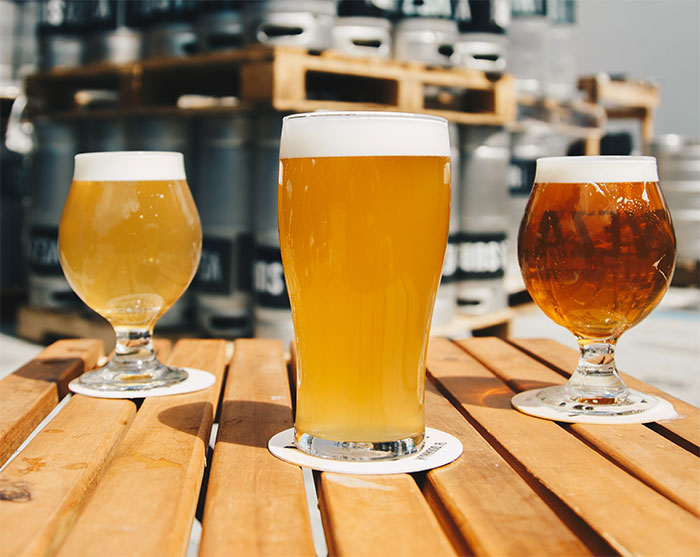 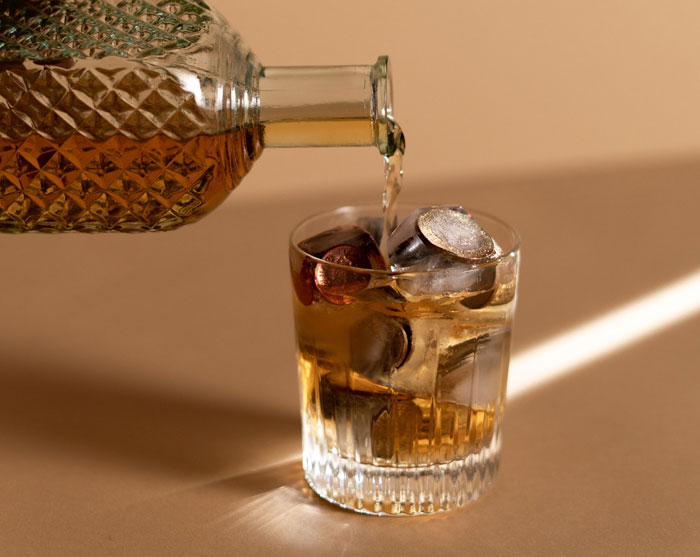 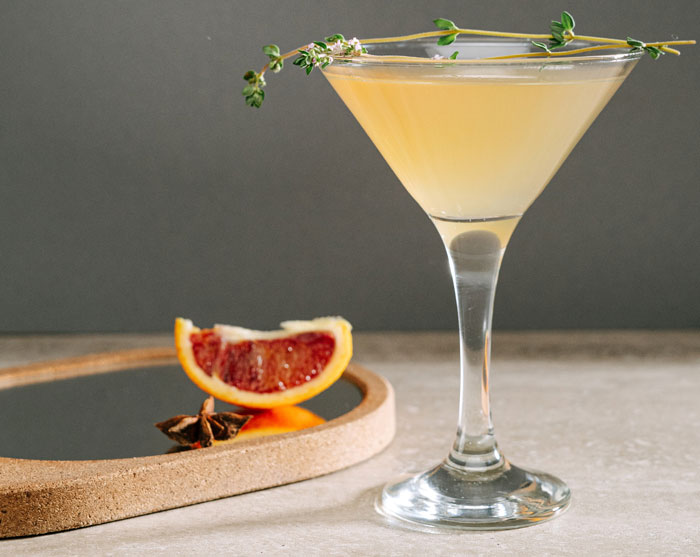 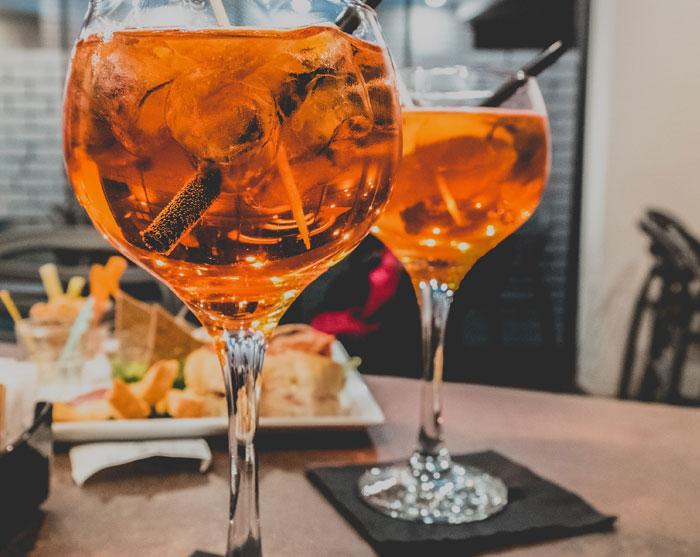 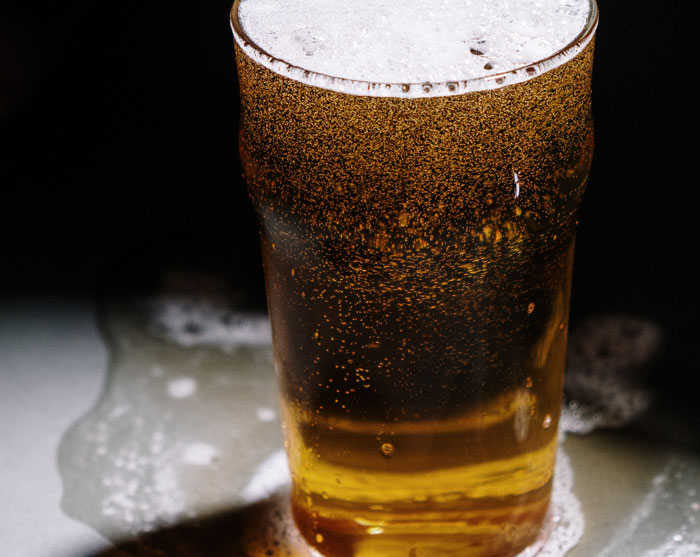 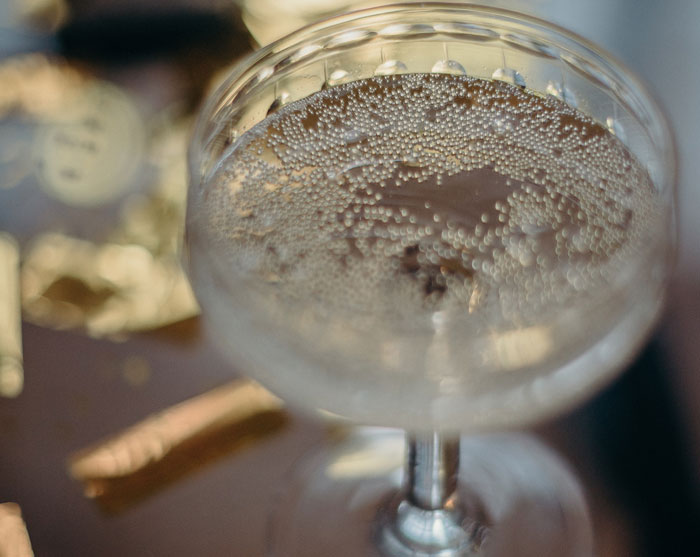 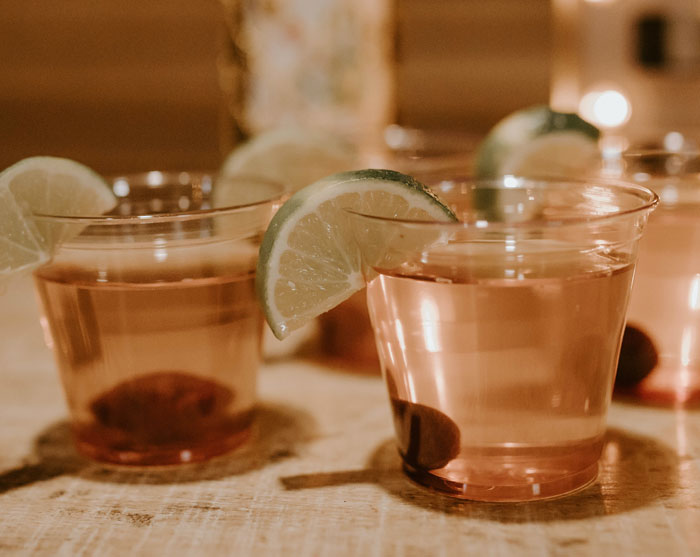 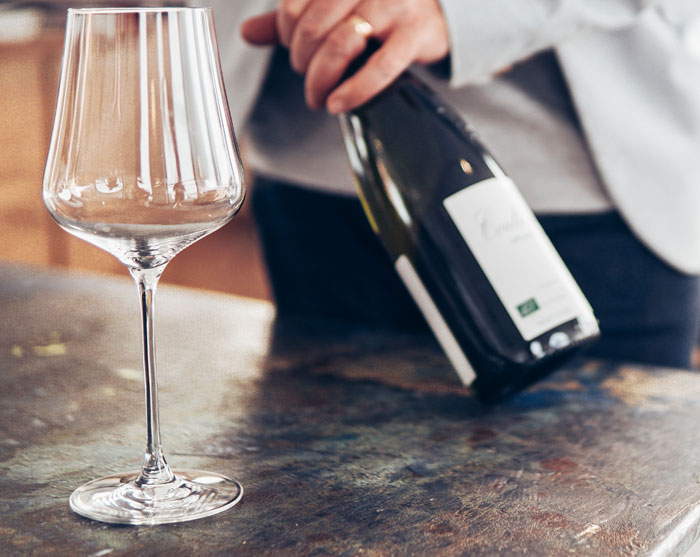 These glasses are mostly used in UK pubs but that doesn’t mean you can’t buy it and use it at your home. Personalised pint glasses are very popular as a gift for special occasions. What is the difference between different glasses? Usually it is all about shape and style which suppose to enhance flavour and overall experience of drinking beer. Some beer glasses are simplified and toughened to extend their lifespan which make them perfect for pubs and bars.

This is a feature you would very often find in modern glasses. A nucleated glass features very small pits which allow gas to be better released. This helps to preserve the head of the beer. There are two types of nucleation:
– laser nucleated base which offers optimum nucleation,
– printed nucleated base which is perfect for branding.

Nonic glass is a classic type of glass used in pubs in the UK. The glass is variation from conical design with small but noticeable difference. The glass bulges out a few centimeters from the top. The purpose of this feature is to keep the glasses apart when stored, so they do not stick together. It also protects the rim from damage (40% greater crushing strength) and helps to hold the glass. This glass has started to be popular after 1948. 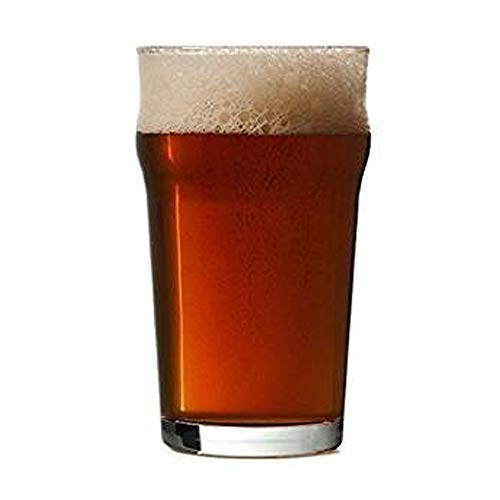 This is a glass which you would often see in pubs in the UK. It is simple, clean, without any logos pub style glass. It fits a full pint of a beer perfectly with just small space left at the top. Bring a pub into your home with this old-style classic beer glass. 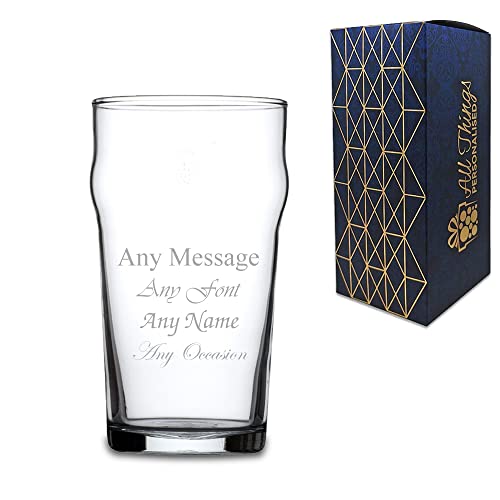 Classic pint beer glass personalised with any text you like. Perfect gift for any occasion. Toughened glass & CE mark. 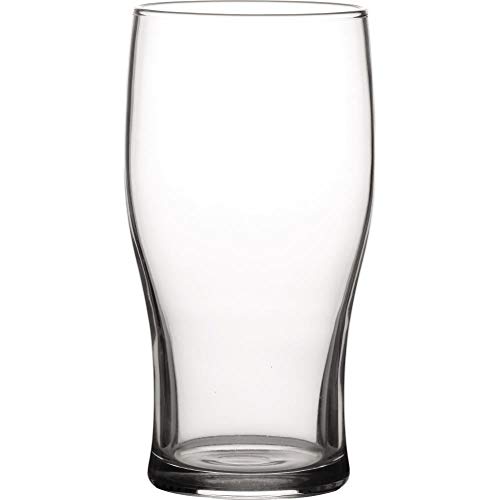 Very popular and classic beer glass. These glasses are perfect for any beer and they are usually tempered for durability. 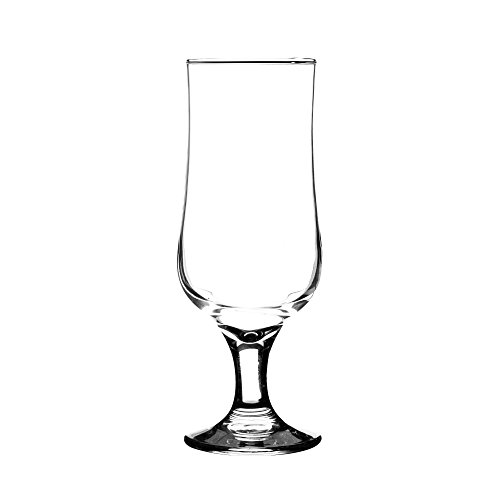 This glass is beautiful and perfectly shaped for your favourite beer. It is stemmed tulip glass with 35cl capacity. The glass is made by Ravenhead which guarantees high quality finish. The glass is dishwasher safe. 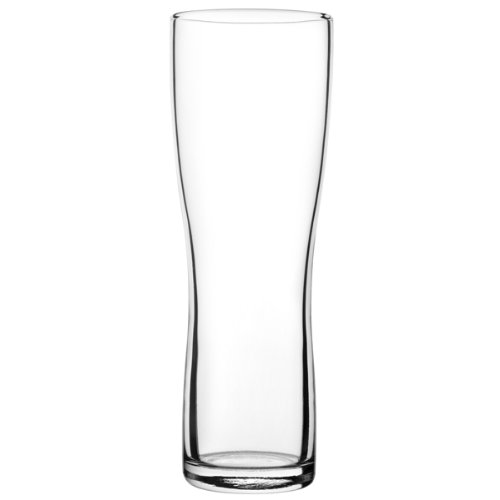 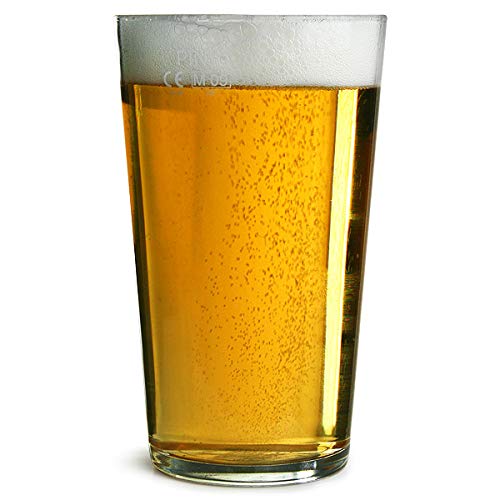 Conical glasses are shaped as inverted truncated cone. They are around 6 inches (15cm) tall and tapering by about 1 inch (25mm) in diameter over its height. The glass comes from US but it is widely used in Europe too. Practical, sturdy and simple design makes it perfect for pubs and bars. Can be also used for soft drinks when they need to be served in pints. 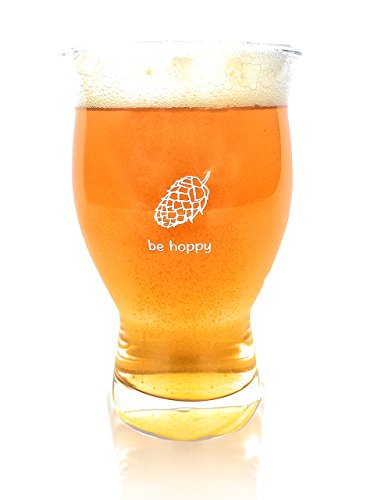 This is highly nucleated glass with more than 100 nucleation points. The glass has been designed in a way to enhance the beer by narrow top trap and large bowl. It suppose to intensify the smell and taste of the beer. It should also retain the head for longer. 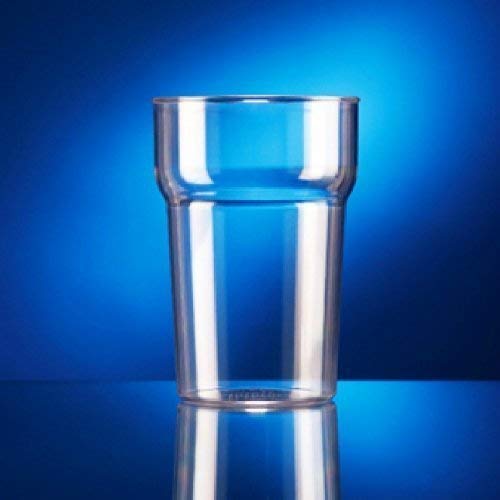 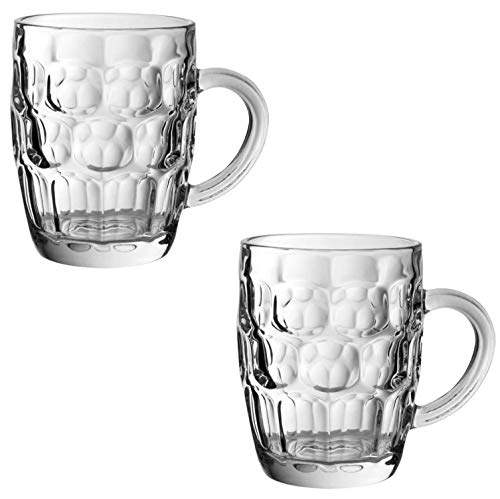 Pint glasses with handle are usually more sturdy and long lasting. They are thicker and easier to handle. Very popular among the beer clinkers. This is traditional pint, tankards, dimpled glass. Material: Annealed glass. 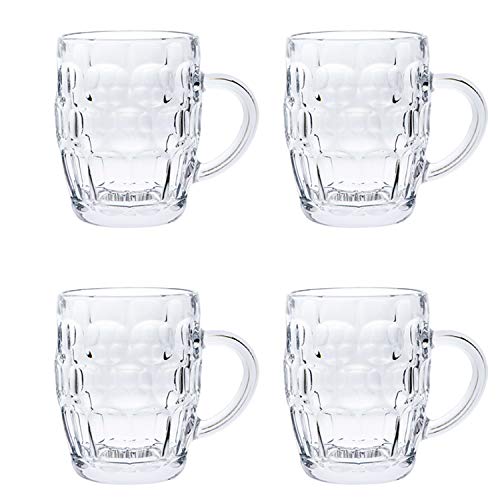 This is a set of 4 classic beer glasses with handle. Stein dimple tankard style old pub glasses. Very strong and durable glasses will last for years. 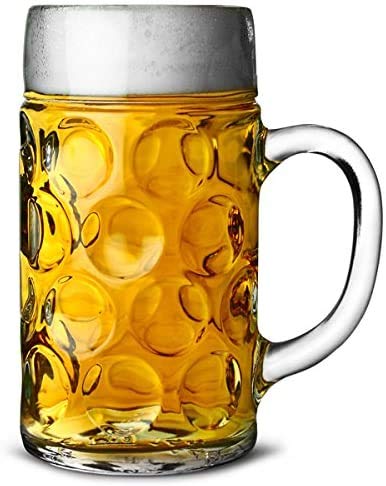 People often wonder why we drink beer, cider and lager by the pint and where the tradition came from. The reason why old innkeepers and pub landlords served drinks in pints was down to mathematics. Pints make sense because it is a simple division of the ale’s casks from the brewery.

Beer was, and still is in the UK, measured in imperial units. In imperial units, a hogshead is 54 gallons, and a poly pin contains 36 gallons. There are eight pints to the gallon so splitting a gallon into eight pints avoids any waste ale being left at the bottom of the barrel.

Pint glasses became popular during the mid 20th century, quickly replacing traditional tankards made from pewter, ceramic and glass. Serving beer, cider and lager in glass pint glasses not only made the drinks look good but were more economical for pub landlords to buy and replace compared to ceramic tankards.

When we raise a glass to toast one another, we shout ‘cheers’ and then clink our glasses together. While it is a much more satisfying experience to clink glass pint glasses together rather than ceramic or pewter tankards, the exact origins of this tradition have been lost in history.

It is thought that the custom of raising a (pint) glass to each other before drinking started with Ancient Greeks and Romans, who used to make offerings of wine to their respective gods before major celebrations to bring good luck.

The tradition of raising a glass at weddings is thought to come from this tradition to wish the new bride and groom luck for their marriage and future life together. Weddings are full of ‘toasts’, but did you know that the expression ‘to toast’ actually came from Elizabethan times when people would put a piece of toast into their wine to improve the taste.

The piece of toast soaked up some of the acidity in the poor quality wine, and it was also a sneaky way to stretch the wine budget further to lessen the wedding costs.

Pint glasses come in a wide variety of different styles. These include the conical ‘sleevers’ style that tapers by about one inch in diameter from rim to base, the Nonik pint glass that has a bulge a couple of inches below the rim, which helps you grip the glass, the jug glass or dimple mug style with a handle, and the tulip style pint glass, which is a more modern design that is taller with a flared rim.

A more recent pint glass style mimics that of a standard pint-sized beer can. This pint glass has straight, cylindrical sides with an inverted lip and base. This style is around 40 per cent lighter than a conical style pint glass because it is less prone to tipping, so it doesn’t need to have a heavy base to provide stability.

With so many different styles of pint glass available, it can be as simple as choosing the one you like the look of the most to make an excellent gift. However, if you are buying for someone with a favourite tipple, think about purchasing a pint glass that will make their drink look good.

For someone that loves Guinness, for example, a glass where they can watch how the cream sticks to the glass edges will be a winner. Unlike other beers and lagers with carbon dioxide bubbles, Guinness bubbles tend to sink in a glass.

Guinness drinkers are prepared to wait a couple of extra minutes for their pint to settle in the glass before taking a sip.  As the famous slogan says, good things come to those who wait!

We use cookies on our website to give you the most relevant experience by remembering your preferences and repeat visits. By clicking “Accept All”, you consent to the use of ALL the cookies. However, you may visit "Cookie Settings" to provide a controlled consent.
Cookie SettingsAccept All
Manage consent

This website uses cookies to improve your experience while you navigate through the website. Out of these, the cookies that are categorized as necessary are stored on your browser as they are essential for the working of basic functionalities of the website. We also use third-party cookies that help us analyze and understand how you use this website. These cookies will be stored in your browser only with your consent. You also have the option to opt-out of these cookies. But opting out of some of these cookies may affect your browsing experience.
Necessary Always Enabled
Necessary cookies are absolutely essential for the website to function properly. These cookies ensure basic functionalities and security features of the website, anonymously.
Functional
Functional cookies help to perform certain functionalities like sharing the content of the website on social media platforms, collect feedbacks, and other third-party features.
Performance
Performance cookies are used to understand and analyze the key performance indexes of the website which helps in delivering a better user experience for the visitors.
Analytics
Analytical cookies are used to understand how visitors interact with the website. These cookies help provide information on metrics the number of visitors, bounce rate, traffic source, etc.
Advertisement
Advertisement cookies are used to provide visitors with relevant ads and marketing campaigns. These cookies track visitors across websites and collect information to provide customized ads.
Others
Other uncategorized cookies are those that are being analyzed and have not been classified into a category as yet.
SAVE & ACCEPT
Go to Top